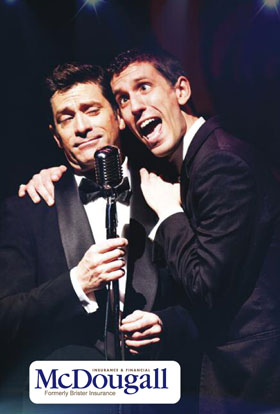 Derek Marshall and Nicholas Arnold present a fabulous concert of hits and comedy. With their own brand of wacky humour they pay tribute to the comedy team that dominated television, radio and nightclub stages in the 1950s with timeless hits such as Everybody Loves Somebody, Sway, You’re Nobody ‘Til Somebody Loves You, Volaré, That’s Amore, Return To Me, Standing on the Corner, Memories Are Made of This, You’ll Never Walk Alone and Jerry’s #1 hit, Rockabye Your Baby with a Dixie Melody. The comedy shtick and story-telling of these two terrific entertainers will take you through the real-life story that begs the question ‘what if they had never split?’ Back by popular demand after a sold out first run. Limited engagement so book early.